Liverpool was named European Capital of Culture in 2008, but that badge of honour still stands, in many opinions, due to the city’s diverse and rich heritage.

Perhaps most famous for being the birthplace of The Beatles, if you are looking for a videographer to assist you down the long and winding road to success in Liverpool, then you have come to the right place. Do you want to know a secret? Whether your are from Penny Lane, a day tripper or a resident of Liverpool, you can get by with a little help from your (video) friends at Splento.

These videographers will work eight days a week, and put in a hard day’s night to ensure you get the footage you need, doing every little thing they need to do to ensure you are 100% happy with the results. Whether you are a paperback writer, a Lady Madonna or a taxman, whatever your video requirements, we can work it out.

So if you are in need of an exceptional videographer in Liverpool, there’s no need to even say “don’t let me down”, just come together with one of these amazing people.

I have been a Filmmaker and Content Creator for around 6 years now, working on multiple projects across many different areas and businesses.

Ever since I was a child I’ve always had a camera in my hand. What started as a passion for photography in the early days, then became a passion for all things video.

I love to create something that makes people smile and creates a reaction, but most of all, tells a story. For me behind the camera is where I feel at home; it’s where I come alive, and there’s no better feeling for me than capturing that perfect shot.

Vessel Studios is the largest independent studio in the northwest, with an in-house production company creating unforgettable imagery for both global brands and emerging makers.

Half Cut is a full-service, creative video production agency, injecting heaps of personality and creativity into every single video.

World Cup Brazil. Guardians of the Galaxy. The Birth of Half Cut.

We’ve come a long way since then. Slapping up the best videos this side of the Irish Sea, growing into a team of creative, passionate, and talented filmmakers.

I am a highly-skilled videographer with a passion for video and ﬁlm. With over 10 years of experience, I am conﬁdent and able to produce work to suit any brief and exceed expectations. I have worked with high proﬁle music labels, working to strict deadlines which have given me the ability to quickly turn around projects, but still to the highest possible standard.

I have worked for 7 years in the business, and love it! During my career, I have worked on film sets for the BBC, ITV & Fox Films.

In 2017, I was given the chance to make films for a local company, so I threw myself in at the deep end. I started to hone my skills, particularly in filming interviews; which has become something of a specialty.  I like to help people communicate their message and authentically tell their story, whether it’s in a corporate promo, a more personal documentary, or a spoken word piece.  Additionally, I love to film events and music videos. My service is professional and affordable and I have many satisfied clients returning for more business. 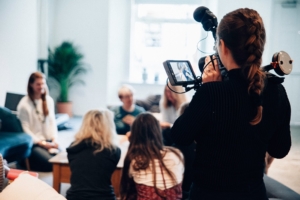 Get some great advice and learn the right questions to ask when booking:

How to find video marketing experts near me.