This is a post that we intend to develop further over time. Our aim is to answer the main FAQs that you have about videography, the equipment, and best practices.

To start with, we have tackled the most common questions that we get asked the most.

We look forward to hearing from you!

What is the difference between 4k and HD?

4k and HD both refer to the display resolution of a screen. A 1080p screen is HD (High Definition) and has 1,920 horizontal pixels with 1,080 vertical pixels making up the display. Meanwhile, a 4k screen has 3,840 pixels horizontally, and 2,160 vertically.

4k screens, therefore, offer much greater resolution and a much clearer, sharper image display than 1080p, and can usually display more colours, but they do cost more. And as with all new tech, prices are already falling away rapidly for 4k screens (TV and computer monitors) and it will not be long before only a limited availability of 1080p screens are still being offered for sale.

What microphone should I choose?

There are several different types of microphones available for video production and they all have their advantages and potential drawbacks, so here’s a rundown of the options available.

Also known as the collar mics, lavalier mics or even lavs. These are small, tidy condenser microphones designed to be clipped to a shirt, jacket or collar. They can be wired (with the wire discretely hidden from view) or wireless. Lavalier microphones are perfect for interviews and also for when the speaker is walking and moving, as they negate the need for a boom mike. This also means they are excellent for wide-angle work as well.

Attached to clothing, they are hardly visible, and can even be placed beneath clothing for those times when mic invisibility is needed, but care must be taken not to muffle the sound. Some experimentation may be required to find the best placement under, for example, a shirt.

Lapel mics are also ideal for situations that have multiple people, as each individual can be wired up separately and speech perfectly captured from each one.

The boom mic is a long directional microphone that is carried and ‘aimed’ by a boom operator. The sound pickup from a boom mic is generally much better than a lavalier, but they are more expensive and do need a separate operator to control them. Held above the head of the speaker, it is important to keep the mic out of the camera’s view, yet close enough to pick up their speech clearly.

The boom mic must be aimed at the mouth of the speaker at all times, so they are not convenient for walking and talking. They are especially useful for program presenters, home studio recordings, vlogs and podcasts, etc, where the speaker is usually seated and stationary.

Boom mics are also referred to as shotgun mics.

On-camera mics are a midway point between lavalier mics and boom mics; they are, in fact, a short boom mic that can be attached to the top of a camera.

This gives the advantage of being able to move the mic around with the camera, but it is still important to remember to keep it directed at the speaker or else lose sound quality. For filming with limited movement though, they can be a perfect solution.

For the best quality studio recording, use a studio microphone. These are positioned just a few centimetres in from of the person speaking, so visually they are less attractive, but for podcasts, radio work and other studio settings they offer the best sound recording quality. They will often come with a pop filter (pop screen) for protection, which also cancels some of the ‘pop’ speech noises from the voice. 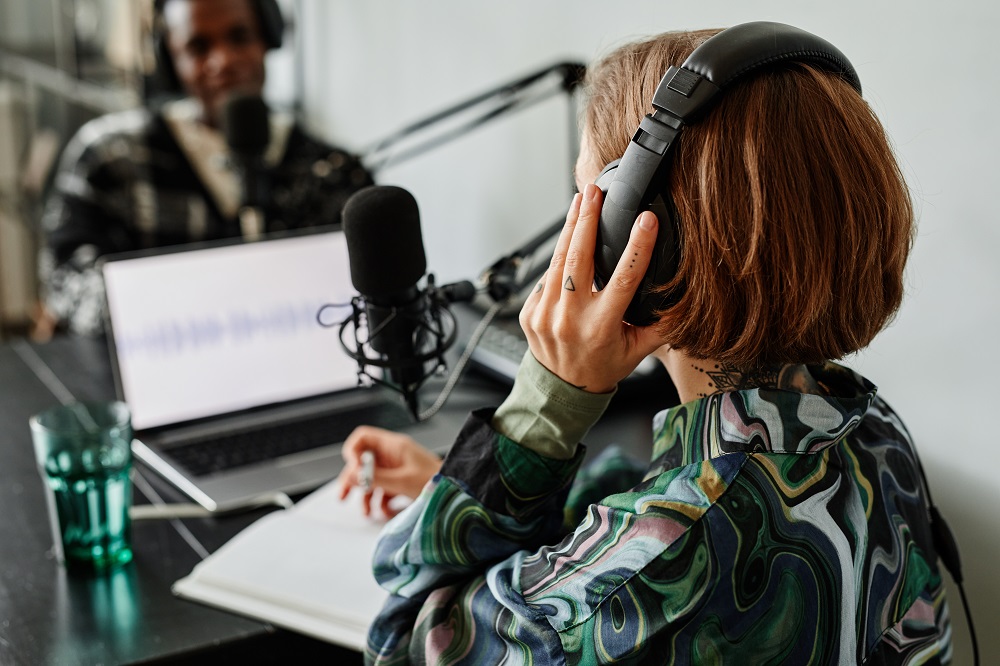 Do I need a sound engineer at an event?

The short answer is yes – or no. It depends!

For a simple setup – one mic and a couple of speakers – then probably the answer will be no. Once the setup gets more complicated than that, then usually having a sound engineer is a good idea. Even for a simple situation, the equipment will still need to be set up and checked before use, but most people will be able to do this competently. Have someone speak into the microphone while a second person stands near the rear of the auditorium and adjusts the levels so that the speaking can be heard from various points in the venue.

For a speaking event, this will often be enough.

Anything more complex than this really will benefit from having a professional sound engineer, however. If there is music to play or other sound projections, and especially if there is live music or even a multiple mic setup, then it is best to have someone with relevant experience to handle the sound.

But it really does depend on the event and the level of expectation. A company presentation with a few speakers and a little pre-recorded music could still be handled by almost anyone with a little practice beforehand. A large corporate event, however, when impressions will count, and again we are straying back into ‘get a professional’ territory.

For the larger event where audio is key (ie. any paid event, such as a concert) then it is possible that more than one engineer may be required; one to handle the auditorium sound (that the audience hears) and another to run the stage sounds (feedback for those on stage).

If in doubt, it is usually best to seek professional guidance before deciding to go down the DIY route.

Do I need a second camera?

Not always, but again, it depends.

For filming that requires a smooth, professional end result, then two cameras are almost essential, as they allow for filming from multiple angles, close-ups, cut-aways and for professional editing.

Filming with a single camera only gives one point of view, and although the camera can be moved about, the opportunity for multiple angles with different viewpoints is lost.

Multiple cameras give a better viewing experience, as they allow for close-ups and wide angles, mixes and transitions. With a professional video editor, these can be used to create some great effects and dramatically change the focus of the film for the viewers. There are more opportunities for creativity and flexibility, as two separate views of a scene being filmed can be captured at once, each focussing on a different part of the event and even different people.

For example, one camera could be filming a speaker giving a presentation while the other captures audience reactions.

Having more than one camera also means a backup in case one camera misses something from a shot, whether due to a technical error or even a human one!

It is important to synchronise the film from different camera angles on a multi-camera setup so that images and audio flow smoothly later on in the edit. This can be done in-camera (using a timecode feature if the camera has one) or sometimes can be done post-filming in the editing suite (usually less satisfactory, but can still work effectively well).

Do I need lighting?

Great lighting is needed, even for shooting outdoors!

Correct lighting is perhaps the single most important element of shooting video, as without it, the results will be less than perfect.

Lighting in a studio setting is usually straightforward, especially if the is little or no movement (ie. a presenter sitting at a desk). For more complicated settings, some experimentation may be required, but most situations will be covered by one of a number of standard studio setups. Regardless, studio lighting will be needed unless there is a lot of natural light from the windows. Even then, reflectors will be needed to bounce the light around and get rid of unwanted shadows.

Shooting outdoors means that sunlight can be used, but even then additional lighting may be needed in many situations. At the very least, reflectors will be required, as with indoor lighting. The golden hour of early morning and late evening can be used to great effect.

However, relying on natural light is a risk. It can be too poor in many circumstances, and too harsh in others. It is usually better to use a lighting setup even for outdoor work if a truly professional result is needed. 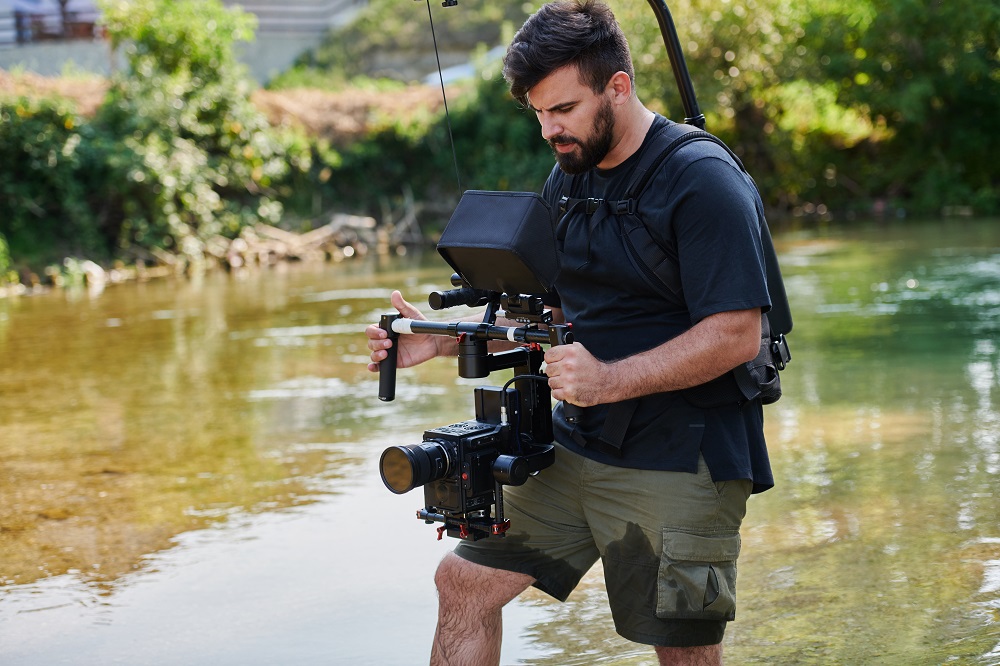 What is a gimbal?

Gimbals are devices that eliminate hand-held camera shake when a tripod is not convenient to use.

More usually today, they are seen as a harness worn by the camera operator (see image) which guarantees a smooth ride for the camera even as they move around filming. Whilst in-camera stabilisation can work in a very limited way, gimbals can handle any movement that the camera operator makes.

Tripods are great for a static camera, but any movement with a camera requires a device to stabilise the image, and a gimbal is perfect for this.

The alternative is to use a dolly, which is essentially a camera mount on wheels or a track, but these are limited in direction and require extensive setup before use. A gimbal harness allows the camera operator to move around freely and without fear of ruining the shot.

How to ensure filming goes as well as expected?

Book the best date and time

Filming takes time – so don’t make a booking for when there are a lot of other things going on! Choose a date with an empty diary page and keep it clear.

Take time to run through everything with the filming company beforehand, so everyone is on the same page, knows what to expect from the day and understands the results trying to be achieved.

Ideally, have a written brief and talk through it in advance of the filming day.

For most filming, a quiet area without interruption works best, but it does depend on the subject matter, of course. Filming a documentary about a noisy factory inevitably means background noise, but any interviews should be filmed separately and away from the noise disturbance, and not on the factory floor.

Lighting is another consideration, as too much sunlight (or even the wrong type of artificial light) can play havoc with the visuals.

Ideally, this would have already been discussed in advance with the film crew and, if appropriate, they will have already scouted the location.

Preparation of everyone involved

Everyone who is being filmed should know what is expected of them and also know this well in advance. Discussions should be held (if necessary) regarding appearance, dress, behaviour, background noise, who is saying what and who is expected to be where – and when.

Filming can be a long, complex process and, although it may often not run like clockwork, most headaches can be avoided with proper planning, and coordination with those responsible for the filming on the day.

Do all of this in advance. More tips for preparation, including appearance and clothing, can be found in the article Tips on shooting a corporate video.

On the day – setting up

Filming usually means setting up equipment before the actual shoot can commence, so make sure it is understood how much time is required from the film crew.

Also, consider all practical arrangements and prepare accordingly. For example, parking for a car/van with equipment, and access to the locations for shooting (especially on a weekend if the location is a workplace that is normally open during the week only, for example).

The final piece of advice is communication. Keeping in touch with the filming crew is essential, as is notifying them of any changes that may crop up, whether that be changes to location, personnel, or any other part of the plan.

The more information they have, the better the end result will be.

What are the essentials a videographer needs to know?