The idea of flying your camera was probably a progressive thought in the past few decades, but now that it’s actually here, videographers sometimes have no idea where to start. They find themselves wondering exactly how to make a drone video.

Flying a drone is as easy as driving a remote control car, but capturing drone videography is a bit more complicated than that.

There are certain rules when it comes to filming aerial footage to create a perfect video. If you’re new to drone videography, here are the most common mistakes that beginners make that you can avoid.

If you find yourself needing drone footage right now, yet don’t want to commit to the cost of buying and flying at this time, then take a look at Splento’s Aerial Filming services – a fixed-price, low-cost alternative to doing it all yourself. 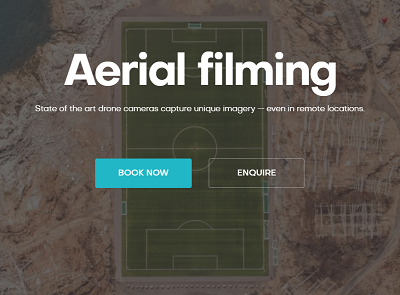 If you have just bought a drone, or are new to drone piloting, however, then read on for some useful what-not-to-do suggestions:

Aerial footage shouldn’t be treated as eye candy for viewers as it serves a much greater purpose than that. You might be tempted to use drone videography in your video just because it looks visually appealing. But don’t do it – it comes across as irrelevant material to the viewer. Stick to the purpose and the plan you made for your video and keep all your footage relevant!

Flying a drone can be fun and exciting but don’t get carried away. You may want to fly as high as possible just because you can. But remember that the sense of movement captured on a drone diminishes drastically the higher it flies. So play all you want with the drone (and have fun!), but when it comes to working – keep the drone low enough to capture the motion.

Another mistake that beginners often make when it comes to drone videography is ignoring the weather conditions and just not planning ahead. If the sunlight is too harsh your lighting will be terrible or if the winds are too strong your footage will be shaky. Always pay attention to the weather and plan ahead accordingly, even if it means rescheduling your shoot.

To master drone videography, a videographer has to be adept at flying the drone. If you are poorly skilled at controlling the drone movements, you’re bound to have bumps in the video which will ruin the aesthetic of the shot. So ensure you practise flying the drone before you move on to shooting with it.

Always choose a frame rate that matches your intended video. In general, videographers often use 24fps if they’re going for a cinematic shot. But for different usage, there are different frame rates so, as part of your plan, figure out your frame rate.

A good piece of advice for novice drone videographers is to remember to set the right pace when flying a drone. Flying slowly makes sure you capture all the subjects in detail, while flying fast may cause jitter in the footage. Follow your intuition when it comes to pace; you’ll know what looks good.

If you’re buying a drone, make sure you plan for insurance as well, otherwise, you’ll be responsible for any drone or property damage, and may expose yourself to legal issues. If you are shooting commercially, then public liability insurance is a must.

Finally, remember to check the situation regarding permissions and permits for flying drones in the area you plan to film. Each country (and/or state) has different legislation regarding drone flying, so check online with the appropriate government websites before taking your new drone out for a spin.

As drone regulations become less lenient, more and more videographers are leaning towards this mode of shooting. But before you get into it, make sure to know what to expect. Drone videography is complicated and may not even be useful for your videos, so do your research before investing in a drone.

Drone videography isn’t as easy as it looks. There are quite a few factors to consider, and there’s always a degree of experimentation. Try changing one thing at a time and see what suits your style of shooting. If you keep at it, then there’s no way to go but up!